Now that the new year has arrived, it is time to plan the vineyard pruning effort as spring approaches.  Along US 290, one can see that pruning has started in many vineyards.  And, there are posts and videos on FaceBook and Utube addressing the subject of vine pruning.  But, I wanted to approach this subject in my own way for this Carl’s Corner post.  Starting my 17th season of vine pruning, I’ve decided to share my approach in this updated Carl’s Corner post.  During your next visit to 4.0 Cellars, you are invited to wander out to the 4.0 Cellars “Pet Vineyard” to take a look at the Black Spanish vines either before or after pruning starts.

At the end of the harvest season, leaves are left on the vine to encourage photosynthesis.  This helps build carbohydrate reserves that the vine will use to come to life in the spring before new leaves develop to restart photosynthesis.  Once the leaves drop after late fall temperatures plummet, these carbohydrates migrate to the trunk and root system of the vine to await spring renewal.  Over the winter months, the vine goes dormant with little or no sap flow or nutrients in the upper portion where stems, leaves and fruit were at harvest.  While the vine is dormant, just before the spring renewal begins, is the time to remove almost all of last season’s woody growth to prepare for new growth this season. 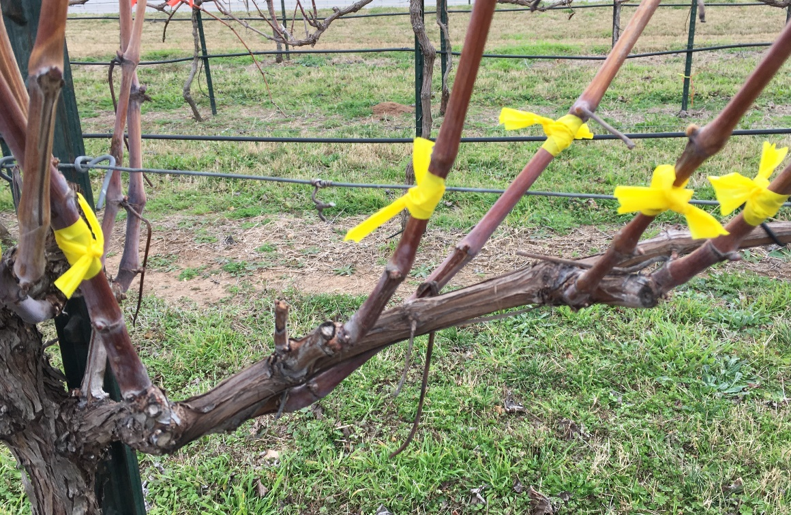 Figure 1.  Vine limbs, called cordons, to be pruned down to 2-3 buds (cut at yellow tape) from which this season’s new growth will develop.

When approaching a vine to prune, one first considers cordon pruning.  The cordon is the horizontal limb of the vine from which stems and fruit developed last season.  You often see photos of thick, gnarly cordons on old vines in CA or Europe that have been used for many years.  It has been my experience here in Texas that cordons do not always develop in such a way as to maintain long-term suitability.  If there is a wide gap on the cordon (wider than the width of your fist) between fruiting bud spurs, it will often be advantageous to remove that cordon and lay over a younger cane which can develop into a new fruiting cordon.  The goal for cordon pruning is to leave 5-6 nodes or spurs (where stems were last season) with 2-3 buds per node on each side of the vine trunk.

When cane pruning is necessary, a sound, healthy stem (orange tag) originating from near the trunk of the vine is selected and bent over above the cordon limb to be removed.  This cane may be stiff during dormancy, but will become more flexible when spring renewal begins and sap starts to flow.  At this point, the cane can be attached to the fruiting wire to replace the last year’s cordon once removed. 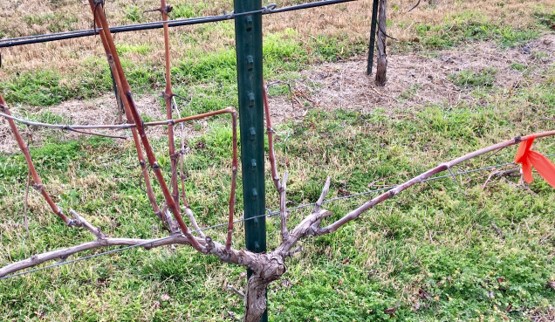 Figure 3.  A vine to be cordon pruned on one side (left) and cane pruned on the other (orange tag on layover cane). The old cordon already removed.

Pruning all of that stemmy growth from last year can take some time as tendrils from the vine like to attach to the wires of the trellis.  One frustration in pruning is cutting loose a tendril but really biting into a wire with sharp pruning shears creating the need to stop and re-shape/re-sharpen the blade.  Many vineyard managers do rough- or pre-pruning by removing stems above the first trellis wire leaving about 6-8 inches of stem above the fruiting wire (where the cordon is/was).  This can be done relatively quickly and gets rid of most of the woody waste.  A second pass with more focus and care is done to prune back to the point where only 2-3 buds are left on each node.  For layover canes, there should be only one bud every 3-5 inches, so no additional pruning will be necessary other than to cut the end of cane off leaving just 5-6 buds from which new growth will sprout.

At the end of this process, two things need to be done before declaring success.  First, all those vine clippings need to be removed from the vineyard and disposed of properly (dumpster or burn pile).  These stems could well be infected with diseased tissue from the previous season and if left on the vineyard floor, can initiate early problems.  The second thing to do is spray the vines with an appropriate fungicide that will help mitigate any carryover of fungal disease or mildew from last season that can readily enter the open “wounds” on the vine created by pruning.

One final figure seems appropriate to illustrate the amazing capacity of grape vines to grow back from the relatively severe pruning process in early spring to produce stems, leaves, and grape clusters by late summer harvest time.  Grape vines are amazing, but they sure do require a lot of care and maintenance in order to provide quality fruit for making good wines.  Make sure to thank your grape growers for their efforts in helping to provide the raw materials for delicious Texas wines. 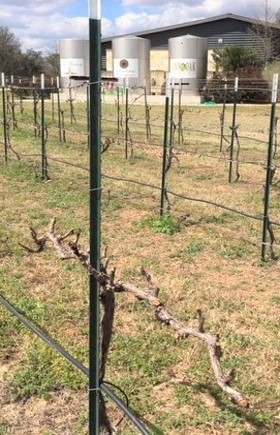