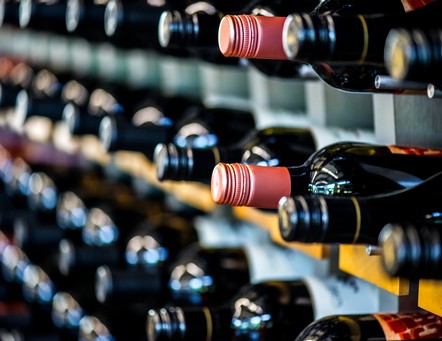 Mourvèdre (moor-ved), also known as Mataró or Monastrell, is an important grape in warm weather areas of Europe, especially along the Mediterranean Coast of Spain and France.  Also grown in Australia and the U.S., the styles of wine made from Mourvèdre range from rosés to lighter reds, and from dark, full-bodied reds to port-style wines.

Many believe Mourvèdre originated in Spain, near Mataró, Cataluña, outside Barcelona.  Today the grape is called Mataró locally and Monastrell more widely, names that sometimes find their way onto U.S. producers’ labels.  After the European phylloxera scourge (late 1800’s) most French vineyards were replanted with Vitis vinifera varieties grafted to American rootstock.  Since Mourvèdre did not take well to grafting, many vineyards in the French regions of Languedoc-Roussillon, Rhone Valley and Provence were replanted to other varieties.  Only in the Bandol appellation of Provence is Mourvèdre a major player, since by law, all red Bandols must contain at least 50% Mourvèdre.

Mourvèdre grows best where it gets plenty of heat and sunshine to fully ripen (think Texas).  It also buds late, an advantage it enjoys over Tempranillo in avoiding much spring frost and hail damage.  The vines do require timely and sufficient water and can be susceptible to diseases like powdery and downy mildew.  Thus, diligent and efficient farming practices are required.  At the 2015 Texas Hill Country Wineries Symposium in Fredericksburg, several winegrowers noted that Mourvèdre is easier to grow than Tempranillo and will be a key grape for the future of Texas wine.

In both Old and New World wine regions, Mourvèdre is popular for rosé winemaking.  The wines can be made as a dedicated rosé where skins are allowed brief contact with the juice to introduce color, or as saignée where some of the juice destined for a red Mourvèdre is "bled off" during fermentation to create two separate wines—a darker, more concentrated red and a lighter rosé.

Mourvèdre produces small thick-skinned berries that are high in both color and flavor phenolics that can lead to dark, tannic wines with lots of alcohol.  The wines often exhibit wild game and/or earthy notes with soft red berry fruit flavors that emerge as the wines age.  Mourvèdre is high in natural antioxidants, thus aging well.  It is a key component in the French wines of Chateauneuf-du-Pape and Bandol, Spanish Monastrell, and the increasingly popular GSM blends from around the world (Grenache-Syrah-Mourvèdre).  Mourvèdre wines do not absorb oak flavoring well, so most are aged in neutral oak barrels or tanks, or in stainless steel or concrete vessels.  Texas now produces a number of varietal Mourvèdre wines, and has joined with producers from Australia and other parts of the U.S. to highlight GSM blends.  So, stay tuned as Mourvèdre becomes an ever bigger part of the Texas Wine Industry.