Carl's Corner - How is an AVA Established?

To start the process of creating an AVA, in any state, a petition to the Alcohol and Tobacco, Tax and Trade Bureau (TTB) is required. This involves a relatively complicated set of guidelines specified under the Code of Federal Regulations 27 CFR 9.12. The petition must include all evidentiary materials and other information specified, and sufficient information, data, and evidence such that no independent verification or research is required by TTB. The burden of building an AVA petition is clearly on the submitter(s). A simplified summary of these guidelines and the overall process follows.

A key first step is establishing a NAME for the AVA. This is not nearly so simple as it might seem and has frustrated many attempts to establish AVAs. The name proposed must be currently and directly associated with an area in which viticulture exists. The entire area within the proposed AVA boundary must be nationally or locally known by the name specified in the petition. The petition must completely explain, in narrative form, the manner in which the name is used for the area covered by the proposed AVA. The name and the evidence in support of it must come from sources independent of the petitioner, such as historical and modern government or commercial maps, books, newspapers, magazines, tourist and other promotional materials, local business or school names, and road names. Anecdotal information by itself is not sufficient, but statements taken from local residents with knowledge of the name and its use may be included to support the AVA name. WOW!

Boundary evidence is the next hurdle. The petition must explain in detail the basis for defining the AVA boundary and include reference name evidence and other distinguishing features. In support of the proposed boundary, the petition must outline the commonalities or similarities within that boundary and explain with specificity how those elements are different from adjacent areas outside that boundary. WOW, again!

The petition must also provide a description of common or similar features of the proposed AVA that affect viticulture and make it distinctive. Again, there is the requirement to explain why these characteristics differ from adjacent areas outside the proposed boundaries. For purposes of this section, information relating to distinguishing features affecting viticulture should include the following:

The next requirement, often arduous and detailed, is to provide a clear and understandable boundary description of the proposed AVA that can be drawn and shown in an appropriate scale on a U.S.G.S. map(s). The exact boundary of the AVA must be prominently and clearly drawn on the map(s) without obscuring the underlying features that define the boundary line.

+ Human-made features (such as bridges, buildings, windmills, or water tanks); and

Obviously petitioning for a new AVA or sub-AVA is a time-consuming, detailed process that requires a lot of thought and input by those who submit the proposal to the TTB. More AVA petitions are expected in Texas over the next several decades, and we should all appreciate the efforts that will be made by our friends and associates in the Texas Wine Industry to better define key sources of our grapes. So, drink some Texas fine wine while you cheer the petitioners on! 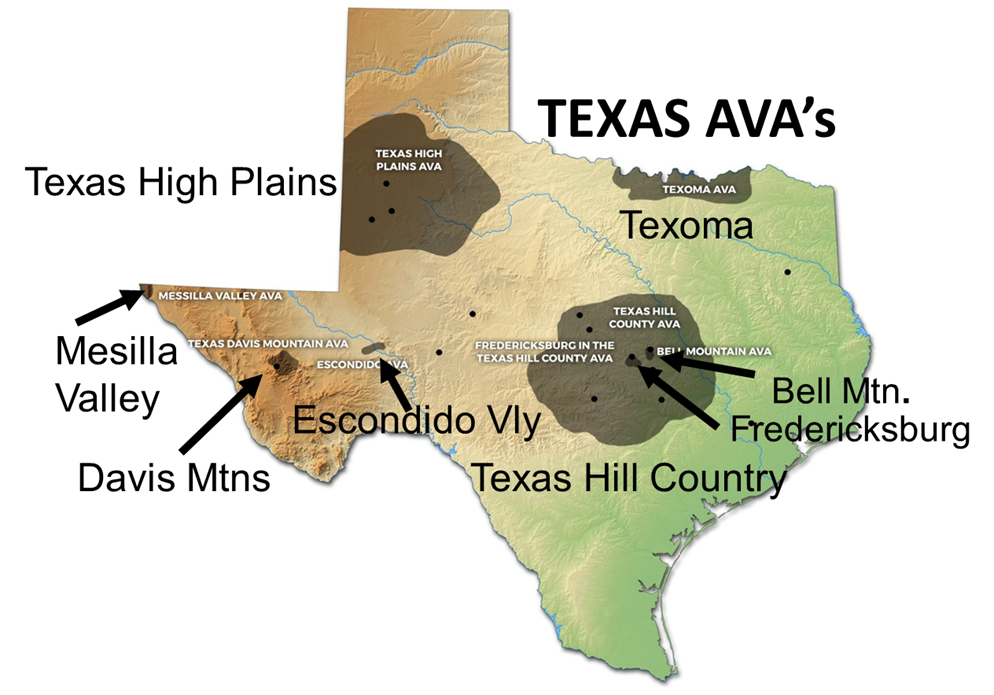